The Arkansas Horseshoeing School (AHS) has a 130-year family blacksmithing and farrier tradition, which is now passed on to students. You have an opportunity to learn from one of the best in the industry.

Choose the course that fits your schedule, needs and budget. Our curriculum has 8, 12, 16 and 24 week traditional courses for prospective  farriers. You’ll learn how to manage a business, equine anatomy, hoof trimming, diagnosing hoof problems, blacksmithing and more.

For experienced farriers, we have the 24 week Modern Materials and Advanced Forging Course.

He believes the formula for success always includes the quality of training and hands-on experience you receive, a course you can afford and having the required tools to start your farrier business.

To become a top farrier, it requires mastery of the skills and art of horseshoeing as well as a desire to uphold the highest standards of the profession.

Are we the right school for you?  This 4 minute video can help you decide.

Meet the owner and head instructor, see the facility and listen to a student going through a course.

VA Benefits students will only be certified for one – traditional course based off the school assessment of needs and training. And the advanced course should the student decide to pursue the program.

Many students come from states all across the U.S., because of the reputation of the school and instructors.
NOTE: We can only accept students living in the United States.

‘‘GI Bill® is a registered trademark of the U.S. Department of Veterans Affairs (VA). More information about education benefits offered by VA is available at the official U.S. government Web site at https://www.benefits.va.gov/gibill.”

Note: The $500.00 deposit is not required if you will be using your VA benefits.

“One of Paul’s recent graduates lives near me and helps us on occasion. He definitely received a strong foundation at AHS, from work ethic to sound fundamentals of Farriery.”
Steve Sermersheim CJF TE, AWCF – Middlefork Forge

We always assist students in finding apprenticeship positions after they finish our program. 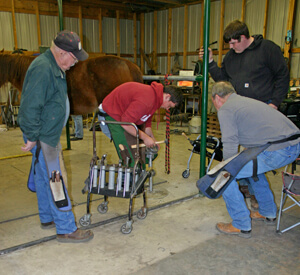 The success rate for graduates of any school skyrockets when apprenticeship is combined with formal education.

We take a personal interest in each individual we work with and enjoy talking with prospective students to answer questions and help them find what they need in a formal education in horseshoeing.

Don’t hesitate to contact us – we want to help
you make an informed decision when evaluating horseshoeing schools.

More About The School 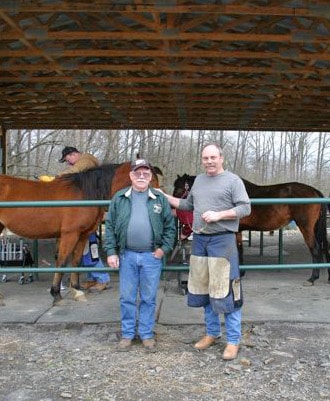 Paul Dorris Jr. founded the Arkansas Horseshoeing School and is the head instructor. His father was also an instructor, though he is now retired, he is still a member of the school faculty. Together they have 75+ years as journeyman farriers.

The faculty worked together to create coursework that gives students everything they need to become outstanding farriers. They decided to keep class sizes ultra small and avoid using teaching assistants.

Their plan was for the farrier school to be as much like an apprenticeship experience as they could manage. Whether you’re in an anatomy class, under a horse, or out in the field working with one of the faculty, you’re always working with the guidance of an expert.

Paul Jr. has a long list of accomplishments. In early October 2010 he was an Official Farrier for the Eventing Division of The World Equestrian Games, where top equine champions from over 50 countries gather every four years to compete. This 2010 WEG is the first time the U.S. has been chosen to host this prestigious event. Over 500,000 attended and it was covered by NBC Sports.

For fourteen years, he’s also been an official farrier at the Rolex Kentucky Three Day Event, also a Four Star Event like the World Games and the Olympics. Paul’s father, Paul Sr. was also an official farrier at Rolex for years. It says a great deal about their reputations that father and son are entrusted with horses of this caliber.

We’re proud of our farrier courses.  A great deal of collaborative effort among the faculty went into designing their content. In addition to the foundation of knowledge in horseshoeing and the business end of things, we’ll also teach you how to maintain your health, concentrating on safety and on how to minimize wear and tear on your body.